Leigh and her husband, Richard White, moved to Cootamundra from Sydney 6 years ago.

Leigh holds a BA Dip Ed, MA and an Advanced Diploma in Applied Aboriginal Studies. She is currently employed by CSU as a casual academic in the Indigenous Academic Success Program.

Before moving to Cootamundra, Leigh owned and managed her own small business in addition to working as the National Community Relations Manager for a not-for-profit organisation. She has high level skills in communication, facilitation, negotiation and management.

Leigh is a member of The Arts Centre Committee, the Course Coordinator of U3A and the non-Indigenous Project Officer of the Cootamundra Aboriginal Working Group. In July 2014, she convened AWARE Cootamundra and Surrounds Social Justice and Environment Group.

Leigh has 4 children and 6 grandchildren, who visit often. In July 2017 one of Leigh’s son and his young family relocated from Sydney to Cootamundra. 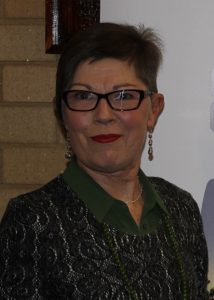