After years of planning, preparation and a massive construction project, Gundagai now has a state-of-the-art Sewage Treatment Plant, that will meet the needs of the Gundagai community for decades.

Representatives from the Department of Planning and Environment and the Department Public Works, along with Councillors, Contractors, MAWANG and CGRC staff were on hand to celebrate the opening.

Apologies were received from Michael McCormack Federal Member for Riverina and Steph Cooke, Member for Cootamundra, who were unable to attend, both driving forces securing funding for the project.

Pete Smith representing MAWANG, addressed the gathering with the Welcome to Country.

Mayor Sheahan welcomed all who attended and gave a brief history of the old treatment plant, and the benefits of the new plant.

“Design and plans were pinned down in 2018 and work commenced. It has been a huge effort to respect and protect the sensitive environment where the plant sits, so close to the river and within a well-used sporting precinct. To ensure the plant is well above recorded flood levels and meets the needs of a community now and into the future.

The new treatment plant comes with modern technology, to monitor and control the treatment process. It can produce treated effluent that complies with current regulatory requirements and the wastewater quality has improved significantly. The plant is equipped with a modern laboratory and new technology that ensures staff have enhanced skills and increased knowledge base to carry out their duties.

It’s been a big project. Over $20 million has been invested and I pass on my gratitude to the Australian Government who contributed $3.5 million for the Building Better Regions Fund. $10 million from the NSW State Government’s Safe and Secure Water Fund and Councils contribution of $6.5 million,” Cr Sheahan said.

Cr Abb McAlister also spoke about the project and the initial planning stages back in the early 2000’s, he spoke highly of former Councillors, and Gundagai Shire Council staff who initiated the project and worked hard over the ensuing years.

Mayor Sheahan invited Cr McAlister to assist with the unveiling of the plaque and all in attendance were taken on a tour of the plant before enjoying a delicious morning tea prepared by Katrina Smith.

3. From the air, the new Gundagai STP is an impressive site and was officially opened on Monday 12 December 2023. 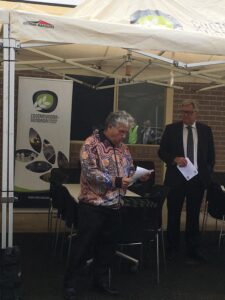 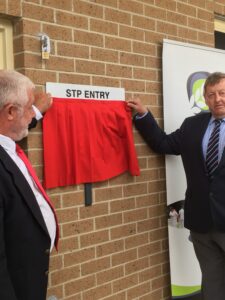 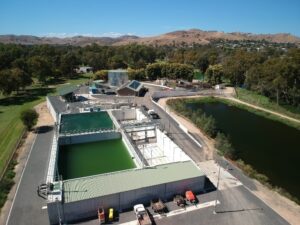