Cootamundra-Gundagai Regional Council’s (CGRC) library in Cootamundra has been a recipient of a National Backyard Cricket grant to the tune of $800. Money that has been spent on special musical instruments for the Baby Bounce and Storytimes programs, held regularly in the library.

National Backyard Cricket (NBC) is a community event to raise funds to level the global playing field in education. NBC was launched with a backyard cricket game at Government House, Canberra in February 2021 where the Governor General hosted a fun day out to raise the profile of NBC and some much needed funds. 56 libraries across Australia (including 5 RRL libraries) were beneficiaries of the resulting NBC grants program, enabled by various NBC fundraisers across the country.

The musical instruments purchased with the NBC grant have special appeal for the very young and are suitable for babies and toddlers to experiment with music and sound.

“The NBC grant was very welcome and has been put to good use, we all recognise that music and sound are important to children’s development. These instruments are robust and safe for the children to experiment and play it’s a delight to watch them making their own forms of music,” Mrs Howse said.

“These instruments will make a difference to the programs offered at Cootamundra library for our very young residents. Initiatives like the NBC make a huge contribution to furthering education at all ages and development. I’d really like to thank them for including our library in this round of grant funding,” Cr Sheahan said. 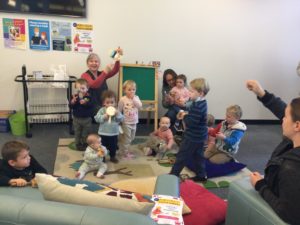