A genuine piece of history has been donated to Cootamundra’s Bradman’s Birthplace Museum. A signed bat by cricketing legend Sir Donald Bradman, was handed over on Thursday by Sydney man Matthew Donnellan, who acquired the signed and framed bat several years ago.

Mr Donnellan visited Cootamundra last year, and took a tour of the Museum, he contacted Cootamundra-Gundagai Regional Council (CGRC) after his visit and made the offer to donate this rare piece of history.

The piece is extremely unique, as the bat also has been signed by English bowler Harold Larwood. The Don’s adversary during the 1932-33 Test Series, commonly known as the “Bodyline Series”. Larwood emigrated to Australia in 1950.

Members of the Bradman Birthplace Museum volunteers and CGRC mayor Cr Charlie Sheahan were on hand to take delivery of the large, framed bat, that contains pictures of the pair and memorabilia.

Cr Sheahan said it was a great addition to the collection at the museum and thanked Mr Donnellan for his generous donation.

“This piece will add to an already comprehensive collection and the story behind its advent and Matthew’s decision to donate it to us, will be one told by our volunteers for years to come,” Cr Sheahan said. 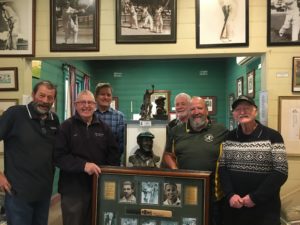