FIRST AVE TO BECOME ONE WAY FOR SAFETY

Cootamundra-Gundagai Regional Council (CGRC) will implement a one-way street in First Avenue Gundagai in late-January. Council resolved to approve the proposal put forward by the local traffic committee at the August meeting.

First Avenue’s one-way traffic flow will be from Kitchener Street to Homer Street. Plans for First Avenue have been prepared to ensure that this change is implemented in accordance with relevant Australian design standards and meets the needs of residents and road users.

The site has been identified as having high traffic flow, being a narrow thoroughfare, and having increased pedestrian activity.

High pedestrian activity area (HPAA), which includes young children using First Avenue will be popular with parents and staff at both the Gundagai Pre-School and St Patricks Primary School. Local Gundagai school bus operators have also welcomed the move, stating the changes to the traffic flow will ease congestion and improve safety for children in the area.

“Our priority is for a safer environment. This street is very narrow and has a lot of traffic traversing through them at various times throughout the day, especially before and after school. The one-way option is far safer for all,” Cr McAlister said.

Signage and new traffic flow will be in place in late January according to a CGRC source.

Photo and caption – Its tight in Gundagai’s First Avenue, particularly when school buses are negotiating the narrow street. 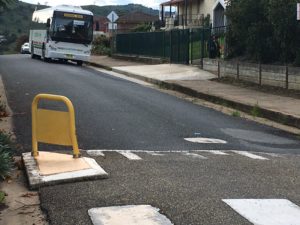