Cootamundra’s $7 million watermain replacement project is now complete with the replacement of a very old section under the railway line at Yass Road undertaken last week. The original contract with a number of additional works has seen approximately 22.7 kilometres of new water mains installed in the town.

$ 2 million was sourced from the Stronger Communities Fund, an initiative of the NSW Government and administered by Cootamundra-Gundagai Regional Council (CGRC) and is part of Councils SCF major projects program. $ 5 million was sourced through CGRC water reserve to complete the works.

CGRC reports that water quality complaints have dropped dramatically, and the incidences of main breaks have also significantly reduced, allowing staff to attend to necessary routine maintenance and operational activities that, necessarily, were sometimes delayed in the past.

Of the 22.7 kilometres of new water mains installed 6.2km were of important major mains that distribute water from the reservoirs to the network that services the town consumers. This also included two very old and vulnerable sections at railway crossings in Yass Road and Pinkerton Road. Failure of either of these mains under the railway lines could have been calamitous.

CGRC mayor Cr Abb McAlister said this has been a great project and a good investment in the town’s water main system.

“We are really pleased this project has been completed however there is more to be done and a 5 to 10 year program of further replacement is currently being prepared, with a view to bringing the whole network up to a modern standard,” Cr McAlister said.

Member for Cootamundra Steph Cooke said this was an important project and was delighted with the outcomes.

“The Stronger Communities Fund has delivered some great projects to Cootamundra-Gundagai Regional Council LGA, this one has seen the replacement of watermains that were in excess of 60 years old, residents will see a huge improvement in water quality,” Ms Cooke said.

The major task of renewing 22 kilometres of Cootamundra’s watermain system is now complete with the replacement of watermains under the railway line in Yass Road. 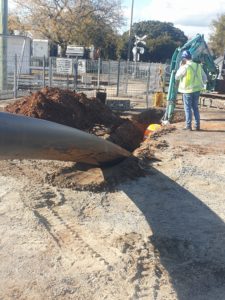 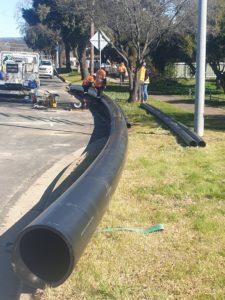