Treatment for the Royal Well

Gundagai’s Royal Well sewerage pump station will soon undergo a complete transformation when construction starts on a new state of the art pump station in August. The old Royal Well as it is affectionately known was built in the 1930’s and has long passed its use by date.

To make way for the new pumping station, the site will be cleared of vegetation and a power pole relocated to safeguard the new structure and employees working on the site. Many of the trees in the area are in danger of dropping large branches and cause damage to underground pipes. Where possible native trees will receive rehabilitation and the area planted out with a more suitable species of trees and shrubs.

Council Parks and Gardens staff have long term plans to further enhance the area along Sheridan Lane, taking in The Old Mill Park with native trees and plant species to attract native birds and make the area more accessible for residents to enjoy some reflection time along Morley’s Creek.

Cootamundra-Gundagai Regional Council (CGRC) officers inspected the Royal Well site on the corner of Sheridan Lane and Homer Street recently, to discuss the relocation of the power pole and tree removal for the construction of a new pumping station on the site. 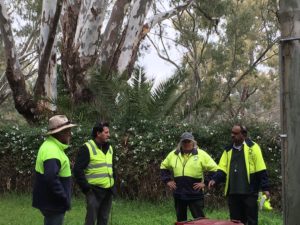