Cootamundra-Gundagai Regional Council (CGRC) has been awarded a grant of $95,000 for a three stage project that will see the revitalisation of the Wallendbeen Heritage Conservation Area along a military service theme.

The project aims to increase community pride in local heritage and increase visitor numbers to the village.  The project was assisted by the NSW Government through the Heritage Near Me program.

The service theme originates with locally raised Major General Kenneth MacKay who formed the First Australian Horse unit. This volunteer militia unit saw combat in the Boer War and precedes the Australian Light Horse Regiment. The impact of military service on Wallendbeen during WWI was great. Ninety men enlisted and 18 died during service. Of the remaining 72 soldiers, many did not return to the district resulting in a significant change to the community. While the number of Wallendbeen enlistments decreased in WWII, members of the local community continued to serve in the Australian Defence Forces in WWII, the Korean War and the Vietnam War.

Member for Cootamundra Steph Cooke MP said she was pleased this project will highlight the military history in Wallendbeen.

“The Wallendbeen community honoured their servicemen and women in several ways with the construction of a cenotaph at the junction of Lackey and King Streets and construction of the Wallendbeen Memorial Hall and supper rooms. This project will enhance these structures and will give visitors and locals a place to reflect and pay homage to the past,” Ms Cooke said.

CGRC has recently secured funding via developer contributions to paint the Wallendbeen grain silos with a military themed mural and is in process of signing an agreement with silo owners and engaging an artist.

“Overall the projects will celebrate the unique history of Wallendbeen, conserve and restore heritage items, encourage visitors to spend time in the village and generate community pride,” Cr McAlister said.

A project in Wallendbeen that will see the revitalisation of the Wallendbeen Heritage Conservation Area along a military service theme, has funding. 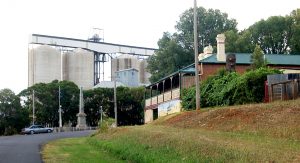