On Tuesday morning Tumblong resident Anne Bayford, took the Pledge and was presented with her Citizenship Certificate by CGRC mayor Cr Abb McAlister, Ms Bayford was also gifted with an Australian Native plant at the small ceremony held in the Gundagai Council offices.

Ms Bayford said she was feeling very humbled and proud after the ceremony.

“This has been a dream since I was 15 years of age, I have been in Australia for a long time, but now I feel like I belong,” Ms Bayford said.

Anne came to Australia in 2008, after spending five years in Zurich Switzerland. Born in the United Kingdom, Anne made her home in Tumblong after spending a few years travelling and living around the country.

The second ceremony took place in the CGRC Meeting Room at Cootamundra. Cootamundra resident Cho Thae Win Cohen, who was accompanied by her delightful family, husband Danny and three children, Ester, Benjamin and Daniel. Mrs Cohen also took the pledge, and was presented with her Citizenship Certificate and an Australian Native plant by Mayor Cr Abb McAlister.

Mrs Cohen was born in Burma, she met her husband Danny in Cambodia where they both were teaching. In 2009 Win and Danny came to Canberra and after six months in the nation’s capital, they made the move to Cootamundra, all three children have been born in Cootamundra.

Mrs Cohen said she was excited, and now had a sense of belonging.

“I’m so excited, and I now have the opportunity to vote. I’ve never been able to vote before,” Ms Cohen added.

Tumblong resident Anne Bayford is pictured with her citizenship certificate. 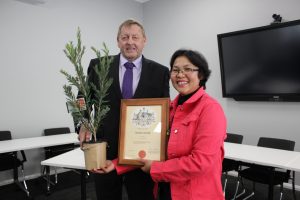