A letter from a horse-riding enthusiast to Cootamundra-Gundagai Regional Council’s (CGRC)’s Road Safety Officer, Kylie Grybaitis asking if Council could put the message out to local motorists about the dangers horse riders encounter on local roads prompted a social media road safety campaign.

Council’s communication department and the Road Safety Officer came up with a media plan, and a competition to promote road safety around horse and horse drawn vehicles. The campaign was designed to inundate social media with posts, photos and road safety tips for motorists when driving near horses during the month of October.

Horse riders were encouraged to send in photos and their own experiences when travelling on local roads. Some creative assets were sort from TfNSW, however most used were from local sources. A colouring competition was undertaken in the Cootamundra and Gundagai Libraries to educate youngsters on the behaviour around horses when driving. Participation has been especially pleasing with more entries received than initially expected. Winners will be announced at the end of next week.

“The idea behind the intensive campaign was to ensure that all people who visited Council’s Facebook page saw the message regularly. Research tells us that the more people see or hear something, the more they remember it. Studies have shown that people need to see a message at least seven times before it sinks in”, CGRC Mayor Charlie Sheahan said.

“This is such a vital message for our communities, we do have a lot of horse riders and horse drawn vehicles travelling on our roads, particularly youngsters during school holidays, our team decided that the message was relevant, important, and it was outside of the normal initiatives undertaken by road safety bodies”, Cr Sheahan added.

Another resident has requested a campaign focusing on stock on local roads which will be run to coincide with harvest road safety.

“We will always run road safety campaigns to educate motorists, and we will run campaigns that we feel are relevant to our communities as well,” Cr Sheahan said.

A suggestion from a local resident for Council to highlight horse rider road safety, has led to an intensive social media campaign initiated by Cootamundra-Gundagai Regional Council. 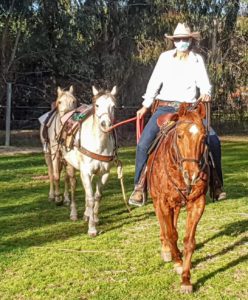