The partnership formed between Cootamundra-Gundagai Regional Council (CGRC) and the Touched by Olivia Foundation, to deliver a playspace in Cootamundra’s iconic Albert Park, has been realised. Livvi’s Place at Albert Park Cootamundra will officially open on Tuesday 28 June 2022 from 10am.

The original concept was to create a unique, inclusive play experience, promoting play for everyone. The project has delivered a space that is set to challenge and encourage adventurous and active nature play.

As a playspace, the feedback from the children indicated that they wanted to see a space that demonstrated Cootamundra’s inclusiveness and promoted the town as a place for visitors. Their feedback also specified the space needed to make everyone feel welcome. The games they liked to play were centred around running, climbing, jumping, having hiding spaces, negotiating obstacles and being imaginative. They wanted a giant treehouse with a ramp that spirals up the tree so everyone could enjoy the experience. They wanted to climb over rocks and swing on different types of apparatus and have areas that they can buddy up to talk and make new friends. They wanted to see water features that encouraged imagination. Most of all they wanted to be challenged and given a space that allowed them to seek new adventures.

The feedback from parents and carers showed that water and water-based play was important, that the landscape remained foremost, with existing trees maintained and the use of natural materials such as dirt mounds and tree logs be utilised as much as possible. They said that kids need to challenge themselves when playing, so risk progression of equipment to be considered and play elements should include ramps and transfer stations so ALL kids can access regardless of ability. The adults wanted the area enclosed, so children were secure and safe in the space, without fear of wandering off onto busy roads.

Both groups saw that an area should be designated for quiet and reflective time, a space that encourages people to enjoy nature, the landscape and meeting up with family, friends and making new friends. They were keen to acknowledge the Indigenous connections to the space, with elements such as the long neck turtle theme to be included.

Children and adults with disabilities and special needs indicated they wanted a space that encouraged them and others to play together, they wanted to be included in climbing a tree, splashing about in water, and rolling down a mound. They wanted to have their senses challenged through touch, feel and smell. Most of all they wanted to meet new friends and experience playtime that is often not possible for them in conventional playgrounds.

Kim Becherand, Head of Inclusive Play at Touched by Olivia, a driving force behind the playspace, said the consultation process highlighted a need for a universal design that facilitated intergenerational play.

“We are so proud of Livvi’s Place, Albert Park and have had such fun and challenges in the creation of it. The children and teens of Cootamundra visioned this space and set the bar very high.  We commend the commitment, dedication, and resourcefulness of CGRC and the whole team who worked on it. This playspace on such a low budget showcases inclusive design, sustainable resources and landscaping doing the heavy lifting to create a space where everyone can experience the benefits of play and passive recreation in community,” Ms Becherand said.

Member for Cootamundra, Steph Cooke said that she was delighted to see this project take shape and is looking forward to being there to see the first children get the opportunity to play on it.

“This playground, which had $200,000 of funding provided by the NSW Government through the initiative Everyone Can Play, has been built in a way where all children, regardless of challenges, can have the chance to play, imagine and explore.” Ms Cooke said

The opening will be attended by Member for Cootamundra, Minister for Emergency Services and Resilience, Minister for Flood Recovery, Steph Cooke, children, parents, Councillors and dignitaries involved in the project.

Picture and caption: The giant tree house, that has utilised an existing tree within the park, and has ramps and transfer stations for children of all abilities to enjoy. 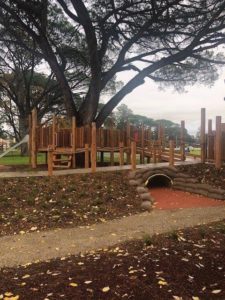