Representatives from the Eastern Riverina Arts (ERA) Advisory Committee visited The Cootamundra Arts Centre on Friday last week to talk to Councillors, staff and interested representatives about the contributions the ERA have made to the Arts in our local government area over the past 12 months and give notice that there are several rounds of grants that will open for community groups and arts practitioners over the next month.

Tim Kurylowicz, CEO of ERA, hosted a lunch where he explained the initiatives, funding and other exciting projects the ERA are currently involved with. The ERA Advisory Committee is made up of representatives of the eight Councils which are members of ERA.

Tim Kurylowicz, CEO of ERA and CGRC mayor Cr Charlie Sheahan discussed the partnership between Council and the ERA at a lunch on Friday at the Cootamundra Arts Centre. 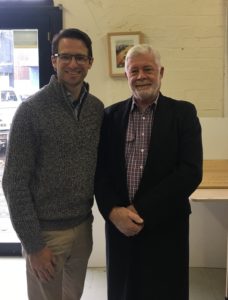