Cootamundra-Gundagai Regional Council (CGRC) Parks and Gardens staff have again been faced with cleaning up and repair amenities after senseless acts of vandalism have created hours of work and thousands of dollars’ worth of damage.

“Somebody knows who the perpetrators are,” CGRC mayor Charlie Sheahan said.

“It’s this type of damage that reduces our ability to provide some really great facilities and programs for our communities, its not just the cost which amounts to thousands, it’s the man hours taken up cleaning up the mess and replacing the damaged items, that’s time our teams aren’t able to utilise elsewhere, and it’s very demoralising for them,” Cr Sheahan said.

Doors have been ripped off hinges, toilet seats torn from the bowls, bins and sanitary boxes broken and rubbish strewn around have been the scenes faced by staff in Albert Park, Mitchell Park, Fisher Park, Nicholson Park and Jubilee Park in Cootamundra. Along with revolting masses of faeces left for CGRC cleaning staff to attend to has staff frustrated and disillusioned. Council staff have been picking up broken toilet seats across town, hinting that the vandals were deliberate in causing as much frustration as possible. Over 30 toilet seats will need to be replaced, at an estimated time of 30 minutes to replace each seat, and the cost of replacement, this damage alone amounts to thousands of dollars. Added to the extra cleaning and repairs this vandalism is costing ratepayer dearly. Road traffic signage and safety gear was also removed from a work site in Mackay Street putting the safety of motorists and pedestrians at risk.

“Not only is this a disgusting act, but it’s also the message it sends to visitors, it distresses our staff who work so hard to make our public spaces a joy to be in, it’s a terrible waste of ratepayer funds and its illegal. I’m urging anyone who witnesses suspicious behaviour in our public spaces to please call the police, or call Council, we need this to stop!” Cr Sheahan added.

Members of the public are encouraged to report damage to Council as soon as possible. In many areas CCTV cameras are positioned and culprits can be identified with footage given to police.

Meaningless acts of vandalism have caused thousands of dollars’ worth of damage to local parks and put lives at risk with the removal of vital safety equipment from a roadside job site. Blood was found in one toilet where it is believed the offender hurt themselves whilst causing the damage. 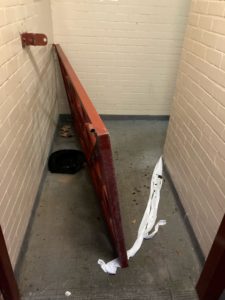 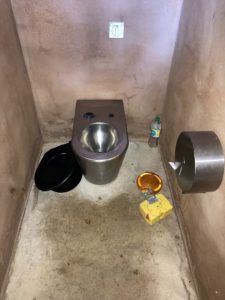