A FEELING OF BELONGING

A citizenship ceremony was held on Monday 16 May 2022 to officially welcome Ariana Watts as an Australian citizen. The ceremony took place in the Alby Schultz Centre at Cootamundra. Cootamundra-Gundagai Regional Council (CGRC) Mayor Cr Charlie Sheahan welcomed Arianna who was accompanied by family members, husband Jon and children Sarah, David and Nadia. A host of friends helped celebrate the momentous occasion along with Councillors Les Boyd and Deputy Mayor Cr Leigh Bowden.

Ariana took the pledge and stood proud as the Australian national anthem played. Cr Sheahan presented her with a Citizenship Certificate and a native plant.

Ariana came to Australia in 2012 and settled in Cootamundra in 2020. Born in Indonesia, Ariana was raised in Malaysia. As a flight attendant Ariana said she never felt she belonged to any country.

“My colleagues would always ask, why my passport was different to theirs and I always had to explain that whilst I lived in Malaysia, I wasn’t a citizen, and then we came to Australia and I knew I just wanted to belong,” Ariana said.

Jon was an airline pilot, and with the COVID-19 pandemic putting airline travel to almost a standstill he lost his job. Jon retrained as a train driver and the couple moved to Cootamundra with their three children from Western Australia.

“It was a memorable six-day trip with a two-week-old baby,” Ariana said.

Ariana said they love Cootamundra, the children have settled in well, with eldest daughter Sarah attending Sacred Heart School, David at pre-school and little Nadia making friends with others her age at library activities.

The couple have purchased a home and see Cootamundra as their home for the future.

“I now feel like I belong!” Ariana said after the ceremony.

Photo and caption: Ariana Watts took the pledge and was welcomed as an Australian Citizen in Cootamundra on Monday 15 May 2022. 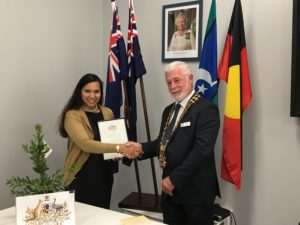