Children and teens from two Cootamundra schools were able to lend a hand and make new friends earlier this week as they planted out some of the gardens at the new inclusive nature playspace in Albert Park.

The students participated in a playspace design workshop when community consultation sessions were taking place in August/September 2020. They were excited to see their vision of what the playspace could be when it comes to life.

William Powell, School Captain of Elouera School said when we were asked how we wanted to play in nature, what we would like to be able to do, we never thought it would be this good.

After planting a number of shrubs, picked for their sensory capabilities, the children were given a short tour, and a general overview of the elements Livvi’s Place will house. They were excited to see the tree house, caterpillar, Flintstones cave and other components the park will feature.

“I can’t wait until it’s finished, and we can all come together again and see each other,” William commented to his fellow planting buddies.

“We are looking forward to playing in the water features and I’m excited about the tunnel,” William said.

CGRC mayor Cr Charlie Sheahan, assisted with the planting and had a test run in the sand feature.

“We are delighted that the children, families, and wider community continue to be involved as we near completion. It was so valuable to get feedback from so many, especially those we don’t often hear from, about what they wanted here and what was needed to be considered to make sure Livvi’s Place, Albert Park will be a place for all, regardless of age or ability, where everyone comes and plays together,” Cr Sheahan said.

“Council, in partnership with Livvi’s Place, have taken the community lead on this project and with thorough community engagement, have created a playspace that reflected the desires of the children, families and wider community. The consultation sessions highlighted the importance of an intergenerational, passive recreation space in town where adventure and imagination would flourish, where kids could take risks and build resilience and where families, friends and community groups could come together, make new friends, and build community connections,” Cr Sheahan added.

Kim Becherand, Head of Inclusive Play at Touched by Olivia said the engagement was very clear that the children and community really understood what we needed to do here to create an inclusive playspace.

“This area is very important for Cootamundra and demographic the town serves. The feedback we received told us that the community really wanted somewhere in town where everyone could come and join together, feel safe and welcome,” Ms Becherand said.

“They also wanted to show that Cootamundra is thriving inclusive and diverse community. The vision for this park was for it to be different to all others in Cootamundra. Using the tall trees and wide-open space was the starting point to encourage a design where everyone could experience the benefits, fun and adventure of nature play in a safe and supported environment. This included wishes to climb real trees, make mud pies and build cubbies, to climb and jump and swing in free play and be challenged in what there is to play on,” Ms Becherand added.

Mayor Sheahan thanked the children and teens for their participation.

“I want to thank you all, for being here today and for letting us know through your responses when we went out to the community in letting us know what you wanted in the space, we hope that we have achieved those wishes,” he said.

In addition to the inclusive nature playspace, the accessibility and safety of the wider amenities has been invested in. Council has improved access pathways, provided more BBQ’s, seating and shelters. Improved and provided accessible parking and upgraded the toilets, with additional accessible toilets for the playspace and broader park users underway.

CGRC Mayor Charlie Sheahan and students from Elouera and CootamundraPrimary School planted out some garden beds in the Livvi’s Space, Albert Park project on Tuesday morning. 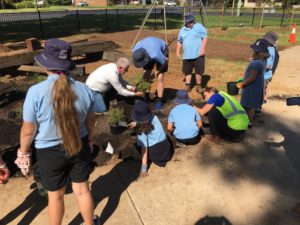