Cootamundra-Gundagai Regional Council (CGRC) parks and gardens staff were dismayed last week when it was discovered that the pipe rail fencing along Owen Vincent Oval in Gundagai was damaged and the top rail of the fence was stolen.

It is believed the theft occurred last week, and has disappointed staff, who will now be forced to spend resources in time and money replacing the rail.

“These fences are particularly important for young children, they represent a boundary, keeping kids off the road. I’m at a loss to understand why someone would think it’s OK to come along and unbolt the fencing brackets and take a length of steel pipe,” Mr Brock said.

The fencing top rail was stolen in two locations within the sports grounds. The theft has been reported to police. Approximately, 4 to 5 lengths of pipe and brackets were taken. It would appear the thieves were disturbed at one stage, as a spanner was left at the scene and Police are investigating further.

Council asks residents to keep an eye out and report all suspicious activities to the police.

The theft of fencing has left CGRC staff disheartened, and placed pressure on resources. A spanner was found, which is believed to have been used to unbolt the brackets, the theft has been reported to police. 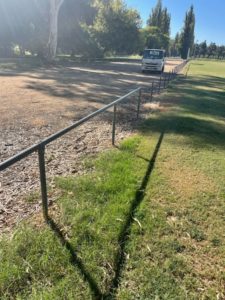