At an Extraordinary meeting of Cootamundra-Gundagai Regional Council (CGRC) on 9 March 2022 Council resolved to accept the resignation of General Manager, Phil McMurray.

Mr McMurray’s resignation came as a surprise to many, and staff were addressed by the mayor Cr Charlie Sheahan, deputy mayor Cr Leigh Bowden and Interim General Manager Glen McAtear on Thursday 10 March 2022.

Mr McMurray said his time with Council has been rewarding, challenging, and gratifying. Mr McMurray has contributed most of his working career to public service and local government.

McMurray started his career at Boorowa in 1994, as an assistant engineer, before working in senior management roles at Liverpool City Council and the Hills Shire Council in Sydney. A passion for local government service continued with him throughout his time with Gundagai Shire Council from 2010 as Director of Engineering and General Manager. The merger between the former Gundagai and Cootamundra Shire Councils, saw McMurray take on the Deputy General Manager role and then General Manager from 2018.

Described by his peers as a brilliant engineer, McMurray was behind the Sheridan Street Rejuvenation project that has seen Gundagai’s central business district revitalised. He is also responsible for the planning and implementation of Cootamundra’s Water Main replacement project, Gundagai Sewerage Treatment Works replacement project and a host of other major infrastructure projects across the CGRC local government area.

Mr McMurray said he had enjoyed working with CGRC, seeing the organisation through significant change in a difficult environment caused by the forced merger.

“I am proud and pleased that CGRC lead the way of all merged councils in tackling financial sustainability. There is more to be done, however the baseline position has improved to a point, with consolidation Council may look forward to serving the community well for many years. With that said, it is an appropriate time for me to move on to a new environment and new challenges,” Mr McMurray said.

Mr McMurray added, “Council and I were able to mutually agree to a resignation agreement which will allow Council to appoint someone with fresh ideas and perspectives.”

Mr McMurray said he was looking forward to doing some travelling, and to spending more quality time with his family.

“The work-life balance is so very important, and I’ve had time to assess what’s essential for myself and my family, it really is vital that we take the time and check that our priorities are where they should be,” he said.

Mr McMurray is currently assisting in a handover to Mr McAtear supporting him with the immediate needs of Council business and staff management.

Phil McMurray will move onto fresh challenges,after his resignation as General Manager of CGRC. 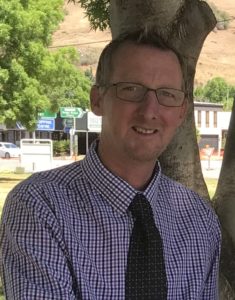