Cootamundra-Gundagai Regional Council’s (CGRC) current road safety campaign is targeted at the use of Seat belts in the region after the recent spate of fatalities that have occurred because of road users not wearing seat belts. During the period 2015-2019 3 out of 14 fatalities were not wearing a seat belts fitted.

Although the introduction of mandatory wearing of seat belts in cars came into force in 1971, statistics state that each year around 40 people are killed on NSW roads because they are not wearing a seatbelt, and around 350 people are injured. These deaths and injuries can be prevented by wearing a seatbelt properly. (source rms.nsw.gov.au)

Unrestrained drivers and passengers run the risk of fines and loss of demerit points and accelerate the risk of serious injury or death. The wearing of seatbelts doubles the chance of survival and reduce the risk of injury in a road crash.

The main functions of a seatbelt are to:

In modern cars, seatbelts are designed to work together with the airbags. In a crash, the seatbelt slows the speed of the occupant, so they impact safely with the airbag.

In a crash, a person who is not restrained by a seatbelt will continue to travel forward at the speed the vehicle was travelling until something stops them. This could be the steering wheel, dashboard, or windscreen. In some crashes, the person may burst through one of the windows and be partially or fully ejected from the vehicle, exposing them to other dangers. They might hit fixed objects or be run over or crushed by their own, or another, vehicle. Even if the vehicle is fitted with an airbag, the force at which an unrestrained occupant strikes the airbag can cause serious injuries.

In a crash, an unrestrained rear-seat occupant continues to travel forward until his or her progress is impeded, usually by one of the front seats. In a severe crash, the force with which the seat is struck is usually sufficient to cause the seat mountings or seat structure to fail. The front seatbelt must then not only restrain the front-seat occupant, but also the failed seat and rear-seat occupant. Seatbelt failures have been reported under these circumstances, resulting in both front and rear occupants sustaining severe and sometimes fatal injuries. Even after striking the seat in front, the passenger’s momentum will usually force their upper body over the top of the seat. Apart from causing them serious injuries, their head can strike a dangerous blow to the front seat occupant. Front seat occupants have been killed or seriously injured in this way. (source roadsafety.transport.nsw.gov.au).

“Not wearing seatbelts results in an over representation of drivers and passengers being seriously injured and killed on our roads. Police officers in the Riverina area detected 63 seatbelt offences in the last 3 months, an alarming 14 of these related to unrestrained children. We urge all drivers and passengers to wear seatbelts at all times, and to ensure that any children being conveyed are appropriately restrained as well.” A spokesperson from NSW Police Riverina Highway Patrol said.

CGRC Road Safety Committee Representative and Councillor Charlie Sheahan said Council was committed to road safety and getting the message out.

“We are all aware that it is the law to wear a seatbelt whilst travelling, unfortunately the message just doesn’t get to some people, and we are saddened that lives are lost when they shouldn’t be. Drivers are responsible for all passengers too.  It’s not hard, remember seat belts do save lives, and clip every trip, even if it is only a short hop,” Cr Sheahan said. 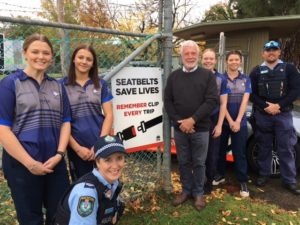 Senior Constable Hannah Bloomfield, was pleased that all members of Cootamundra’s League Tag Team were safely belted up before leaving Fischer Park. Senior Constable Jamie Hampton checked out the back seat passengers to ensure everyone was safe before taking to the road. 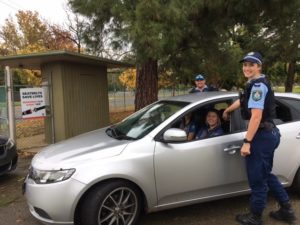