The Parker Street Cootamundra beautification project currently being undertaken by Cootamundra-Gundagai Regional Council (CGRC) is well underway, with the installation of the “Urban Canopee’s” structures. The canopies will provide a spectacular attraction to the central business district.

The canopy structures are manufactured in Australia by the famous Furphys Foundry, not made overseas as some reports on social media have suggested.

Considering the number of concerns received by Council regarding allergies that may be caused because of the original planting of Jasmine, the plant selection has been changed to Clematis Montana ‘Mayleen’. The plant has a light pink/white flower centre with dark pink outer petals. The plant selection is crucial to the project’s success, and the plant varieties which are suitable are very limited due to the requirements of the “urban canopee”. It is hoped this change will relieve some residents’ concerns and demonstrate that Council will listen to concerns and act accordingly.

Australian plant species were considered however there are no suitable Australian plants that will accomplish the task and achieve the objectives for which these structures have been design for.

The plants have been selected to be fast growing, create shade during summer, colour during the year, and are hardy to the Cootamundra environment. It is anticipated that the structures should be totally covered within 3 years after the plant’s establishment.

The potting mix is especially formulated to ensure the correct nutrients for the selected plant is available and the growing medium is conducive to holding moisture during hot periods to minimise the need for water. The watering is controlled by moisture sensors, with a water pump used to automatically irrigate when required. The power is supply by solar. The auto management system is controlled through smart phone via Bluetooth technology

The canopies can be relocated to accommodate future urban planning, should need the arise, without causing damage to them or the surrounding infrastructure. They are secured with footings and bolts for stability and safety.

The structures will be lit at night with enhancement lighting the same as the trees in Parker Street. This is to have them fit into the landscape at night.

CGRC manager for Waste, Parks and Recreation Services, Wayne Bennett said there will be very minimal maintenance of the structures.

“They will require some attention during the plants establishment to ensure good plant coverage over the structures.

Once established there will be very minimal maintenance costs as they are full self-maintained. They water and fertilise automatically are powered by solar panels and the technology will notify staff by Bluetooth when the water reservoir requires filling,” Mr Bennett said.

The aim of the project is to beautify and enhance the experience whilst visiting Cootamundra’s CBD, create jobs and boost local shopping. The project will include establishing street gardens, street furniture, lighting, retaining walls, shelters, new garden beds, associated landscaping and tree planting.

Picture and caption: An image of an “Urban Canopee”. The canopy structures are being installed in Cootamundra’s Parker Street as part of the Parker Street Beautification project, funded by a Federal Government Grant – The Drought Communities Program. 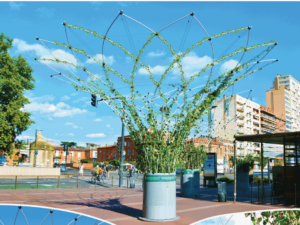