Why Do You Do It!

Cootamundra-Gundagai Regional Council Parks and Gardens team are asking this very question, when cleaning up the broken glass and garbage at Cootamundra’s Skate Park daily.

Why do groups of adolescents who have this park as a facility and place for them to enjoy and socialise, want to wreck it for others, and make the resource virtually useless with their destruction and delinquent behaviour?

“Unfortunately, the condition of the skate park has been an issue for the police, Council and the community. Council has met with the police to discuss options to reduce the number of incidents and issues surrounding the skate park. The police asked Council to provide more security cameras, which Council is in the process of doing. Broken glass has become such an issue that Council has had to add to the occurrence of daily inspections to the Asset Attendants duties.”

“The Parks and Gardens team thoroughly clean the skate park area on Mondays and Fridays, sadly it is the same group of youth that are causing these issues. The police have added extra patrols to area. It has been an added cost to Council, to reduce the risk of injury and keep the area clear as much as possible of the broken glass that has been deliberately smashed on the concrete areas,” CGRC Open Space Co-Ordinator Steve Lowe said.

“We know who the culprits are, and they are a small minority who are effectively putting their peers in danger and a ruining a facility that belongs to the young people of our community, it just doesn’t make sense,” Mr Lowe added.

A concerned resident (who wished to remain anonymous) reported to Council that she was appalled at the state of the skate park after visiting with 10 young children at the weekend.

“After a lovely visit to Jubilee Park, we walked home via the walkway behind the pool and when the children spotted the skate park, they were thrilled to go for a run around on it. By the time I caught up with them, I was sickened at the amount of broken glass on the track. To the point where I was very concerned that one of the children could fall over or lose a thong and we would have a very serious injury as a result,” the resident said.

“It was disgusting, and I can’t think why anyone would be so malicious and callous, glass injuries can have some devastating consequences,” the resident added.

The Cootamundra Youth Council (CYC) has also expressed their concerns regarding the broken glass and lack of respect for the area. The group have been collaborating and formulating ideas in relation to the skate park. The CYC are keen to move forward with improvements to the area in the way of cultural murals, signage, and potentially street art in the area. These plans may be in jeopardy if the destruction continues.

CGRC mayor Cr Abb McAlister said he was disappointed at the vandalism.

“I am really disillusioned that the very people for whom this facility was put in place for are damaging it and putting the safety of others at risk. We certainly do not want to see our children get glass injuries at a place that should be safe and secure. The lack of respect these people have for their peers is so disappointing,” Cr McAlister said.

“If this behaviour continues, we may have to consider closing the park, which will impact on all those who use it responsibly. Council is directing extra resources to clean up the glass to protect users from what could be a shocking injury,” Cr McAlister added.

CGRC is urging residents and skate park users to contact the Police if they witness vandals or inappropriate behaviour at the skate park.

CGRC Parks and Gardens team have increased their time spent cleaning up broken glass from Cootamundra’s Skate Park. The broken glass is a constant occurrence, costing Council extra in cleaning time and posing a huge risk to users. 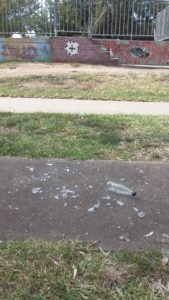