FREE CUPPA FOR DRIVERS COMBATS FATIGUE ON OUR ROADS.

FREE CUPPA FOR DRIVERS COMBATS FATIGUE ON OUR ROADS.

The “Free Cuppa for the Driver” campaign was launched in Cootamundra-Gundagai Regional Council LGA, with two local businesses, the Dog on the Tuckerbox Café at Gundagai and Jules Sub Store in Cootamundra participating in this road safety initiative.

Launched in 2010 the campaign has seen more than 23,000 free cuppas given away to drivers, to combat fatigue.  The second biggest killer on our roads. The initiative of CGRC and Transport for NSW (TfNSW), the campaign runs each year from 1 March to 31 May and takes in the busy Easter and school holiday periods.

Figures for the LGA state 4 of the 14 fatalities (almost 1 third) and 28 out of the 177 road trauma injuries with in the Council area were caused by fatigue during the period 2014-2019. Crashes involving fatigue are amongst the most dangerous as the driver does not brake before they run off the road. Fatigue crashes are usually at high speed.

Cr McAlister said, “Its great to see the Dog on the Tuckerbox café at Gundagai and Jules Sub Store at Cootamundra, taking up this campaign, both businesses are well placed to attract passing traffic and have the surroundings for drivers and passengers to take a rest break.”

“This is a big investment for these businesses, they generously donate a cuppa to the driver of any vehicle on a long drive, more than 100km away from home (as shown on their driver’s licence) and who are stopping for the purpose of taking a break from driving. One driver per vehicle can claim a free cuppa at any single stop.  All types of drivers and vehicles are eligible: trucks, passenger vehicles, RVs, motorbikes, buses, people travelling for work. I applaud the efforts of these businesses to take part and do their bit for road safety,” Cr Sheahan said.​

If you are planning a trip away during March to May, check out the Free Cuppa for the Driver website and map your journey with participating venues. ​Drivers claiming a free cuppa can also go into the draw to win fuel vouchers, travel vouchers or a coffee machine.

A family travelling from Sydney to Melbourne were keen to participate in the launch of the Free Cuppa for the Driver Campaign at the Dog on the Tuckerbox Café in Gundagai. Pictured left to right CGRC mayor Cr Abb McAlister, Manav Gera with daughter Armaan and wife Mehak and Jai Sapra with Cr Charlie Sheahan took a rest break from their journey. The family were returning to Melbourne after visiting Sydney. 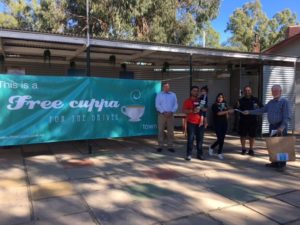