COOTAMUNDRA GUNDAGAI RESIDENTS HAVE THEIR CONCERNS RAISED AT MACQUARIE STREET

Cootamundra-Gundagai Regional Council (CGRC), mayor Cr Abb McAlister who led a deputation to NSW Parliament House in Sydney last Tuesday said the meetings the team had with politicians were constructive and worthwhile.

The mayor along with CGRC general manager Phil McMurray and councillors David Graham, Penny Nicholson, Charlie Sheahan, Leigh Bowden, and deputy mayor Cr Dennis Palmer made the trip to speak with the State’s politicians about the financial crisis CGRC is facing due to the forced merger in 2016, and the application Council has made to IPART for a Special Rate Variation to increase rates by 53.5% over the next four years.

“We undertook the trip to demonstrate to our states leaders, that our community is angry, they are hurting and the financial burden this amalgamation has had on our communities is going to be felt for years and years to come.”

“I felt the meetings went well, we were heard, we presented our case, and we had the opportunity to demonstrate the community sentiment along with the facts and figures needed to validate our case,” Cr McAlister said.

Councillors made the trip to Sydney at their own expense and armed with some hastily made banners, stood out the front of Parliament House, to gain as much impact as possible. Comments and questions came from many politicians as they made their way into parliament for the day.

“We are extremely gratified that the Minister for Local Government Shelley Hancock made time in her day to see us. Ms Hancock did listen to us and we were able to bring to her attention the community’s dissatisfaction and indignation that this forced merger has caused and the negative financial impact it is having and will have into the future on our region,” Cr McAlister added.

The meetings with the opposition and National’s John Barilaro and Steph Cooke were also positive and valuable according to the Mayor.

“We prepared our case, we were armed with the facts and figures, our research was done correctly, we had our talking points ready and were able to put a sensible and rational argument to all, but most of all we were able to take the passion of our communities and present that to the people who can make decisions that ultimately affect us all. They all listened, asked questions and took on board what we had to say.” Cr McAlister said.

“The case for a demerger of the two former shire councils and the reasons for a special rate variation was put forward. We want the what the State Government needs and wants, financially sustainable local governments and communities that feel they can prosper.”

“What is notable is even with a 53.5% SRV over four years, we will not be financially sustainable according to the State government benchmarks. All we are doing is trying to stay solvent – and even that might be in doubt, depending on what happens in the future.”

“We let the politicians know that we are after a Win-Win situation. If we get the de-amalgamation which is what we need to fix the financial mess that past decisions have placed us in. The Government will get a grateful community willing to embrace the increases to rates necessary to get these councils back to a sustainable future,” Cr McAlister said.

“The proposal we put forward poses low risk, CGRC is a special case. Because of the unique structure and distance, the de-amalgamation can be done reasonably cheaply. This is not the case for most other Councils. CGRC was an anomaly – the only rural council in legal challenges that was nevertheless amalgamated. This is an opportunity for state government to right an injustice.  We let them know that as a team we can pull this off. We were the first council to harmonise, the first to do an SRV. We can work together to make tough decisions and get good outcomes for the community. We have the knowledge and skills to carry-off a successful de-amalgamation. Our reputations would be contingent on us doing so. It will be a success because it must be a success.”

“Our clinching argument was that we had two ‘moderately’ sustainable Councils prior to amalgamation. When we separate, we will quickly dispense with diseconomies and return to our former cost structures. Furthermore, we will have additional revenue from higher fees implemented last year as well as the proposed SRV. Logically this would have to dictate that both separated Councils would be more sustainable than they were at the time of the TCorp reviews in 2013.”

“All in all, I was happy with how the meetings went and along with my fellow Councillors we were very grateful for the time afforded to us,” Cr McAlister said.

“It will now become a waiting game; the Boundaries Commission will make a report to the Minister in late February on their hearings held in November last year. This report will be considered by the Minister before any determination can be made on a demerger, in fact this may have to go to cabinet and legislation passed. IPART will make its decision on the SRV in May. The interim period will see Council continue to find ways to reduce costs and provide efficiencies, Cr McAlister added.

Pictured left to right: CGRC deputy mayor Cr Dennis Palmer, mayor Abb McAlister, councillors Penny Nicholson, Leigh Bowden and Charlie Sheahan along with CGRC general manager Phil McMurray standing outside Parliament House in Sydney last Tuesday demonstrating their case for a de-merger. Missing from the photo is Councillor David Graham, who also made the trip to speak with the state’s politicians and at their own expense. 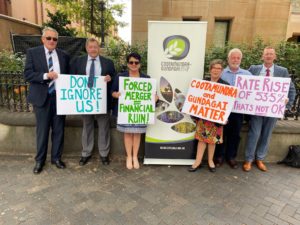