YOUR CHANCE TO WIN A SWAG AND GET HOME SAFE

It’s party time, Christmas cheer and end of work festivities will see many across the region enjoying the odd drink. Cootamundra-Gundagai Regional Council (CGRC), together Transport for NSW and NSW Police are promoting the Plan B – Win A Swag competition with an aim to encourage party goers to have a Plan B in place before going out for the night.

The initiative is underway within the Local Government Area (LGA) with the main message being, if you are drinking, don’t drive. Plan your night out, plan how you are going to get home after a night out. If you drink and drive, you will face the consequences. The initiative aims at reducing alcohol related crashes on our roads.

The program proved especially popular in 2019, with venues across the LGA, coming on board to participate. There were 1575 entries last Christmas from the 10 participating venues. The most common Plan B was to catch a courtesy bus or taxi. The second most common reply was walking, whether it was Shank’s Pony, serenading to the moon or 2 legs and a beating heart or occasionally just plain walking. 249 people used designated drivers which means that 249 people deserve medals for being the sober driver in a car full of fumes and hopefully no mess. Shopping trolleys and wheelbarrows were suggested as a Plan B by 5 people.

CGRC Councillor and Local Traffic Committee representative Cr Charlie Sheahan said drink driving is one of the biggest killers on our roads after speeding.

“Alcohol was a contributing factor in 6415 crashes in New South Wales in the five years from 2014 to 2019, this included 12 crashes in our LGA, one which was fatal. We don’t want any family to suffer the loss of a loved one due to a night out. I urge all who intend having a night out where alcohol is being consumed to please have a Plan B in place to ensure you, your mates and your family are spared the horror of a road crash,” Cr Sheahan said.

Venues participating in the Plan B – Win a Swag promotion are the Beehive Hotel in Coolac, the Albion Hotel, BWS, the Big O Drive Thru Bottle Shop, the Ex Services Club in Cootamundra and in Gundagai BWS, the Criterion Hotel and the Tumblong Tavern.  All of these venues have entry forms for patrons to enter their Plan B, and a prize of a swag will drawn at each venue on Christmas Eve.

The Plan B campaign works hand in hand with police operations that occur throughout the year, both during holidays and every week around NSW.

1.  CGRC Councillor and Local Traffic Committee representative Cr Charlie Sheahan and BWS Cootamundra Store CEO, Brett Seckold have their Plan B for getting home safely.An example of a Plan B – Win A Swag entry from last year. 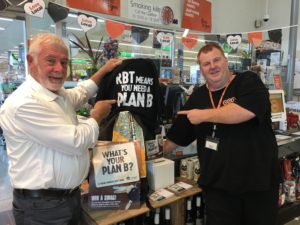 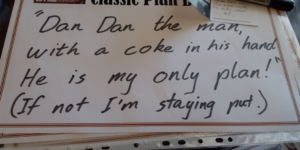