NSW Rural Fire Service Area Mitigation Crews have been undertaking bush fire mitigation works in Stockinbingal village this lately. These works are to assist the community become better prepared for the onset of the bush fire danger period.

There has been a total of three mitigation crews from Bathurst, Oberon, and Cowra working to reduce grass hazards within the village.

Some of the works undertaken have been to assist Cootamundra-Gundagai Regional Council and other work will form part of an annual works program for the Stockinbingal village.

Machinery used by the crews have been a 100hp tractor and slasher, 2 x Billy Goat Self Propelled movers, 1 x 40hp zero turn mower, and brush cutters. 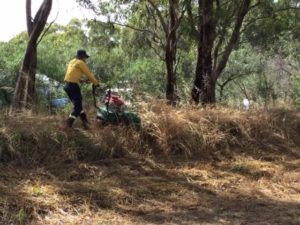