A citizenship ceremony was held on Tuesday to officially welcome Philip and Patricia Moran as Australian citizens. The ceremony took place in the Alby Schultz Centre at Cootamundra. Cootamundra-Gundagai Regional Council (CGRC).  Mayor Cr Abb McAlister welcomed Philip and Patricia, who were accompanied by family and friends to celebrate the momentous occasion. They were also joined by Councillors Dennis Palmer and Leigh Bowden.

The Morans took the pledge together and stood proud as the Australian national anthem played. Cr McAlister presented them both with a Citizenship Certificate and a native plant.

Philip came to Australia with his parents in 1968 from Cheshire in England. He remembers being on a plane and the journey taking two days. The family arrived in December 1968 just after the devastating Blue Mountains bushfires and he recalls his father wondering if they had made the right decision to come to Australia.

“I’ve never looked back and have always considered myself to be an Australian,” Phil said.

Patricia was seven when her family immigrated from Nottinghamshire in England. The family travelled to Australia by ship on a voyage that took six weeks.

The couple made their home in Cootamundra five years ago and have embraced the Cootamundra lifestyle. Phil is an avid supporter and devoted volunteer at Bradman Cottage whilst Patricia volunteers at the Salvation Army store.

“Although we have always considered ourselves to be Australians, this is a special occasion for us and we are proud to have it finally official,” Patricia said.

2 Philip and Patricia Moran surrounded by family at their Citizenship ceremony. 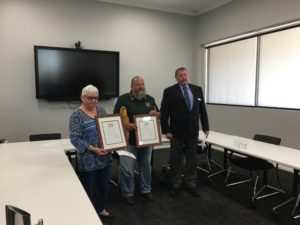 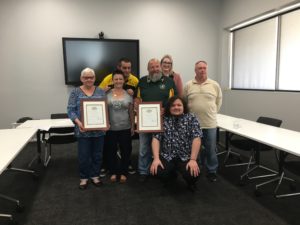