-FOR IMMEDIATE RELEASE-
18 March 2020
Data shows new limit is working
The introduction of a 40km/h speed limit in Gundagai’s main street, Sheridan Street, has slowed traffic in the street and is achieving the desired result.
Cootamundra-Gundagai Regional Council, councillors voted on the introduction of the 40km/h HPAA zone in favour of pedestrian crossings in the newly refurbished main street.
Since the introduction, Council has had traffic counter technology installed to monitor the speed and types of vehicles using the CBD district. The data from the technology has shown a significant decrease in the average speed of motorists as they move along Sheridan Street. The average speed in 2020 between 8am and 12 noon is below 30km/h and between 12noon and 3pm is just over 30 but below 31km/h. The average speed decrease since the introduction of the HPAA zone during business is 4km/h and an impressive 8km/h in the late evening.
Chances of a pedestrian surviving a collision with a car improves significantly with decreasing car speed. Figures obtained from road safety sources state that the percentage of pedestrian fatalities decrease from 85% at 64km/h to 5% at 32km/h.
The data collected shows that whilst there is a decrease in speed across all time zones, it appears motorists are more likely to speed up between midnight and 4am.
CGRC mayor, Cr Abb McAlister said he was delighted that the 40km/h HPPA zone is working.
“It’s a pleasing result, that motorists have slowed down in this area, making it a safer and pedestrian friendly zone for the entire length of our shopping precinct,” Cr McAlister said.
Photo and caption:
CGRC Mayor Cr Abb McAlister is delighted with motorist response to 40km/h HPAA zone in Sheridan Street Gundagai. 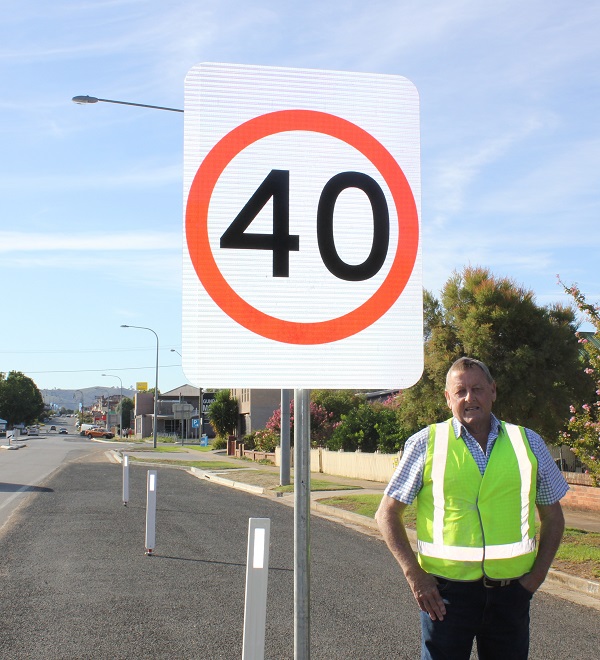