Transport for NSW (TfNSW) have confirmed Cootamundra-Gundagai Regional Council’s (CGRC) request for the implantation of a 40km/h High Pedestrian Activity Area (HPAA) in Gundagai’s main street Sheridan Street. The 900 metre corridor will run from the West Street intersection to the Medical Centre.

Council has conducted extensive research and consultation with Transport for NSW (TfNSW), CGRC traffic committee, Councillors and community members to deliver the safest approach for locals and visitors. Camera footage and CGRC officers’ observations of pedestrian behaviour in Sheridan Street has shown that people are crossing the street at multiple points and are frequently distracted by mobile phones. These observations are in line with research that indicates pedestrians are frequently non-compliant and are often distracted when crossing roads.

Research and scientific analysis show that a pedestrian hit by a car travelling at 40 km/h has twice the chance of surviving the collision than if the car was travelling 50 km/h. Travelling at speeds higher than 40 km/h greatly increases the risk of injury and death to pedestrians. Traffic travelling at 40 km/hr will give pedestrians more time to cross the road and allow pedestrians make more careful observations of the approaching traffic. The drivers of vehicles will be able to confidently react in time to unpredictable pedestrians including shoppers who load their cars from the rear that just happens to be in the traffic flow.

The HPAA 40km/h speed limit zone is in force at all times. The lower speed limit makes drivers aware of the presence of pedestrians moving about or near the road. Creating a safer road environment for all road users, particularly for pedestrians, cyclists and children. Reversing from parking bays will be safer. The HPAA will also enhance the experience for alfresco dinners and visitors sightseeing along the street by reducing traffic noise and discouraging hoons and lapping behaviour.

The zone will also reduce the speed of traffic entering and departing Otway Street and the adjoining Mobil Service Station.  The HPAA will also ensure that normal traffic flow for larger vehicles, buses in particular, are not inhibited, and will not have an impact on their ability to turn in and out of Sheridan Street that causes traffic build ups at intersections. Furthermore the implementation of a HPAA will ensure the current parking bays outside the town’s retail shops will remain.

TfNSW and Council are strongly focused on pedestrian safety. Both recognise that everyone is a pedestrian at some time and should be able to walk safely. 40 km/h High Pedestrian Activity areas are part of a strategy to reduce the number and severity of crashes. Changing the way streets are used in town centres improves the quality of life. They become places for people, not just traffic.

A map showing where the new 40km/h HPAA zone will be implemented in Gundagai’s main street Sheridan Street. 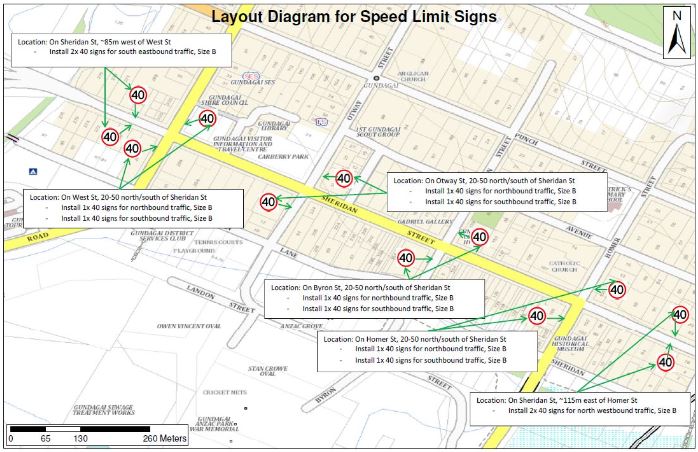