The Three-Ways Bridge on the Adjungbilly Road was reopened to traffic on 17th May. The bridge has been undergoing works since April, with road diversions in place.

The old bridge had been under load limit restriction for an extended period due to structural concerns. The new bridge was fabricated off site, and assembled at the Three-ways site. Council was able to reuse the original bridge deck as this was determined to be satisfactory which resulted in savings on the overall project.

The approaches to the bridge had to be built up to the new height of the new deck by Cootamundra-Gundagai Regional Council road crews. Final works to install new guard rail on the bridge approaches are expected to be completed shortly.

The work has been funded from Roads to Recovery funding, and will now allow heavy vehicles to once again use this route.

The Three-Ways Bridge on Adjungbilly Road has reopened, and load restrictions removed. 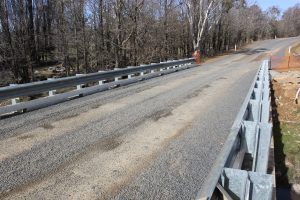