Years of dedication, hard work and persistence came to fruition on Friday afternoon with the official opening of the new amenities block at Stan Crowe Oval.

The new facilities located between Stan Crowe and Owen Vincent Ovals include male and female toilets, showers and change rooms. A well-equipped canteen, a store room and a large spectator shade area have also been incorporated.

Cootamundra-Gundagai Regional Council mayor Cr Abb McAlister presided over the proceedings, thanking all who were involved in bringing the project to fruition. He unveiled a sponsor’s board that recognises the contributions made by the various organisations involved in the project.

“It’s been a long time in the planning, with funds coming from Cootamundra-Gundagai Regional Council, a grant from NSW Rugby League, a grant from McDonald’s NSW Cricket Grants, and thousands raised by user group organisations. We now have a facility to be proud of and is an asset to all,” Cr McAlister said.

Member for Cootamundra Steph Cooke MP, officially cut the ribbon surrounded by children who were excited to be involved.

“It is a privilege to be here, and being involved in this wonderful project. It’s a building and facility that will benefit our future generations. The leadership of the various codes of sport that use this facility are to be congratulated on getting the job done. This is a community that just gets in and gets the job done,” Ms Cooke said.

The large crowd enjoyed a sausage sizzle and refreshments after the opening.

Member for Cootamundra Steph Cooke MP is surrounded by local children who assisted with the cutting of the ribbon marking the official opening of the new amenities and canteen block at Gundagai’s Stan Crowe Oval. 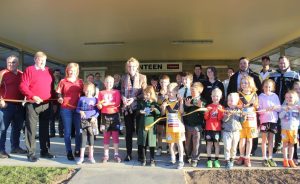