The $1 million in Stronger Communities Fund grants to local organisations has seen over $637,000 worth of projects delivered to our community organisation in just over 12 months since the successful grant recipients were announced.

The Stronger Communities Fund, an initiative of the NSW State Government and administered by Cootamundra-Gundagai Regional Council, has allowed numerous community organisations to upgrade, renovate, renew and revitalise their assets and infrastructure.

Cootamundra’s Scout Hall has had much needed repairs and installed three air conditioning units, replaced their oven, upgraded the electrical distribution board, installed ceiling batts and repaired the floor. Tumblong Hall has a new electrical system that will allow a new kitchen and appliances to be installed, new lights and illuminated exit signs have also bought the hall in line with safety standards. Nangus Hall now has equal access for all, with the building and fitting of a disabled amenities facility. Wallendbeen Combined Churches have purchased new signage and other equipment to enhance their fundraising activities at the Wallendbeen markets. Cootamundra Lions Club have taken delivery of two new caravans. A new street stall van replaces the old van that has assisted many local organisations raise thousands of dollars with the monthly street stalls. The new catering van, will also see our Lions members flipping hamburgers and sizzling sausages for generations to come.

Cootamundra-Gundagai Regional Council mayor, Cr Abb McAlister said he was delighted that local organisations are progressing with their projects.

“It’s been fantastic to see these projects come to fruition. The Stronger Communities Fund grants have allowed our community organisations to purchase new equipment and upgrade their facilities,” Cr McAlister said.

NSW State Government Member for Cootamundra Steph Cooke said it was fantastic to see the difference these projects were making to the way Cootamundra and Gundagai community organisations function.

“29 community organisations have now completed their nominated projects. The revitalisation of local halls, the new equipment purchases and upgrading of assets can only be of benefit to all who use them. I’m thrilled that there has been so much progress to date and look forward to seeing the remaining projects come to fruition,” Ms. Cooke said. 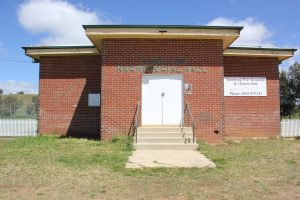